Every since the Reverend Henry Williams (Te Wiremu) translated the Treaty of Waitangi into Māori in 1840, his name has been embroiled in controversy. Now, for the first time, Henry tells his own story through his private letters and journals.
Arriving in 1823, at the height of the musket wars, Henry Williams, his wife and their children settled in Paihia, Bay of Islands, a remote one-hut settlement, surrounded by warring tribes and the possibility of attack at any moment. With faith as his shield, the young ex-naval officer was the new leader of the troubled Church Missionary Society missions.
This unique eye-witness account covers almost twenty years of Henry’s daily life as he lived and travelled with Māori, acted as a peacemaker and successfully saved thousands of lives. An advocate for the Māori language, teacher and surgeon, he travelled the length of the North Island with Māori, spreading the word of peace.

You can purchase this book straight from Caroline Fitzgerald as well by getting in contact via the inquiry form on my contact page. 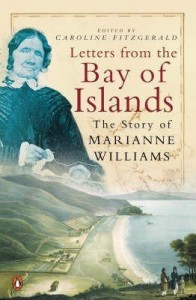 Letters from the Bay of Islands – The Story of Marianne Williams

This book is out of print with Penguin NZ.

In 1822 Marianne Williams, with her missionary husband Henry and their three small children, left England forever. Their new home, in New Zealand’s Bay of Islands, was a remote one-house settlement – the Church Missionary Society mission station headquarters. This was nearly twenty years before the signing of the Treaty of Waitangi. Marianne’s only contact with the outside world was in letters home to her family in Nottingham. It is through these letters that her story can be told. At a time when most women of her age and class were enjoying the luxuries of industrial England, Marianne Williams was living among warring Maori tribes with unruly whaling crews across the bay. With her husband often absent, she was nurse, midwife, and surrogate missionary in the community and coped with running the mission station and schools, providing hospitality to visiting European explorers – including Charles Darwin – and tending to her growing family of eleven children. Yet, despite these immense demands, in her letters the bravery and uncomplaining determination of this extraordinary woman shine through.